Dedicated to those who served on the "SKINNY-T"

USS Schenectady met an ignominious end, off Pearl Harbor, Hawaii. US Air Force B-52's dropped guided bombs on the decommissioned LST, one of which completely destroyed the ship. The seventh ship in the Newport class of Tank Landing Ships, the USS Schenectady served as a target of a recently developed air-to-surface/moving target guided bomb. News footage shows a single hit completely destroying ship. The final resting place of the Schenectady will prove to be a productive artificial reef where none existed before. As a diver on artificial reefs, I will long remember the names and histories of the ships I dove upon more than those who met their fate at the end of a welder's torch. The Schenectady was a great lady in her time. Hopefully, much was learned during her final service as a target. Shipmates probably feel she deserved a kinder fate but her service was honorable. 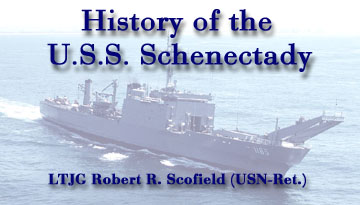 LOTS MORE STUFF ON THE SKINNY-T

This page was erected to pay tribute to a great ship
that met a brave end. It continues to acknowledge the
officers and crew, their lives and times and will serve
as a place to share the good times and the memories.