Here's an amazing story that comes from LT Bob Scofield:

My wife and I just returned from an anniversary cruise in the western Med and the Atlantic.  What a surprise I had as we pulled into Casablanca, Morocco one morning about 6:30 and I went out on our balcony and saw a Newport class LST moored to the pier. When we got home, I checked the list of Newport class LST's and found that the USS Bristol County (LST 1198) had been sold to Morocco in 1994 and recommissioned as SIDI MOHAMMED BEN ABDALLAH (BSL-407). It was amazing to see a ship just like Schenectady sitting in the water and in active use. 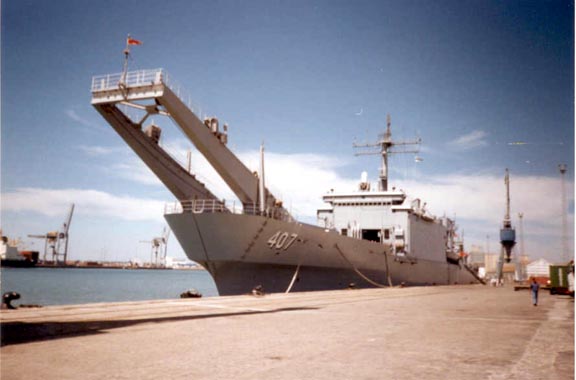 We were on a Norwegian Cruise Line ship that was quite a bit bigger than the former Bristol County. In fact we seemed to dwarf it, and my wife looked at it and said "you went across the Pacific in that little thing?". Yes dear, I said, 4 times.  After Casablanca we headed north to Lisbon, and encountered some heavy weather.  The ship's TV system said we had 12 to 18 foot seas (they did not look that big to me, but I was never very good at estimating wave height) and 25 knot winds.  We were going right into the seas and winds so we did not roll much, but we did pound just a little, and of course the relative wind was 40 to 50 knots.  I think we were rolling about 10 degrees (not much for former Schenectady folks) and my wife just looked at me again and said "could your old ship survive this?". Of course we could, dear, but it would not be fun.
Just to give you an idea of the size difference, the NCL ship was 965 feet long (compared to Schenectady's 522 feet), with a beam of 105 (vs. 70), a draft of 28 (vs. 17) and a weight of 93,000 tons (vs. 8,500).  In addition, the NCL ship had a stabilizer, while Schenectady had no stabilizer and did have a flat bottom.  No comparison.
I also spent time in the "bridge viewing room" where you could go to watch the bridge officers conn the ship. They had a several radar repeaters there to look at and well as a ship's "control" display. I was amazed at what these instruments can do. The radar automatically tracks all contacts and if you put the cursor on one of them it displays the name of the ship, where it is from and going to and what it is carrying (some type of transmitted information system I guess). It also automatically calculates the course and speed and the CPA range, bearing and time -- no more maneuvering boards!! The control system has an auto-pilot into which you enter your starting point and destination, and it calculates a track with a "way point" at each point where you change course or speed. It then controls the speed and rudder to keep you on that track. You set in parameters such as "max rudder angle to use", "max speed", "max deviation from tract (in yards)" etc. Basically, you set it and go. What a deal. I wonder how many of these things they have on Navy ships? 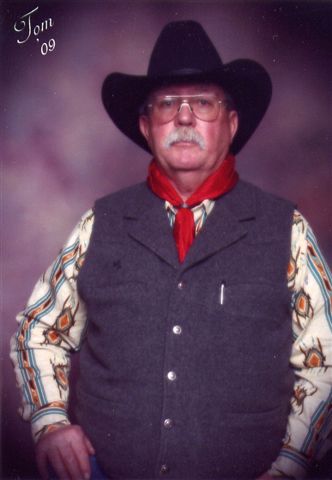 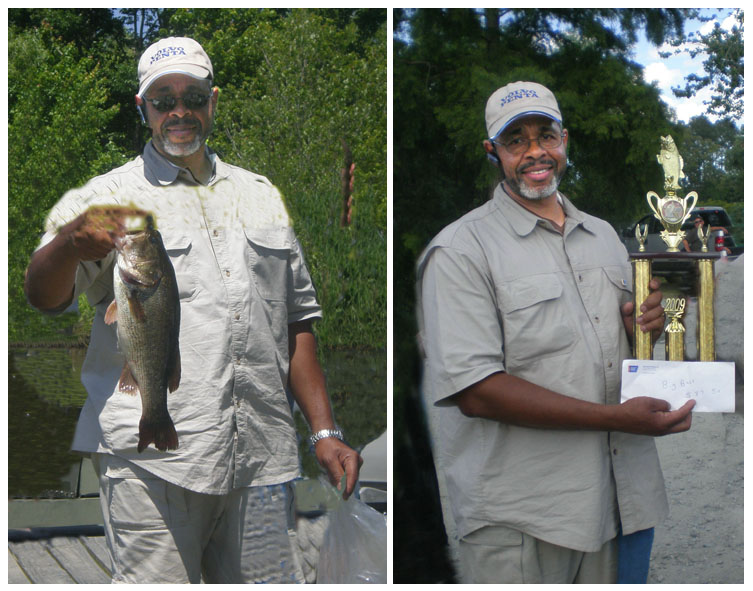 Mike says: "After a very long and tiring day. Big fish pot was $170.00 (hooray for us) but we missed our limit of 5 fish by one, therefore the 4 fish combined weight got us 2nd place trophy. We donated 1/2 the pot to cancer society, and took home the rest.
Big fish weighed 4.7lbs. Total weight of four, 6.14 lbs

Dickie Hillhouse (EN3 aboard from 72-73) drops by Corrales, NM to see the webmaster 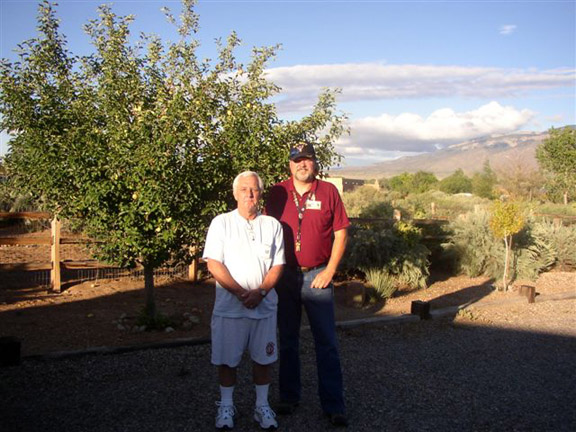 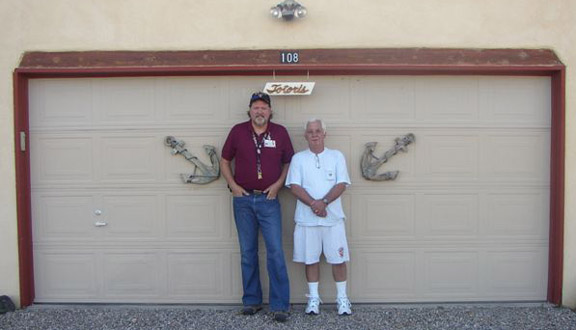 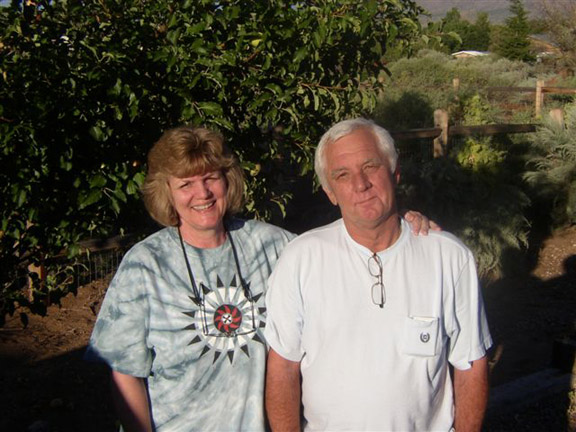 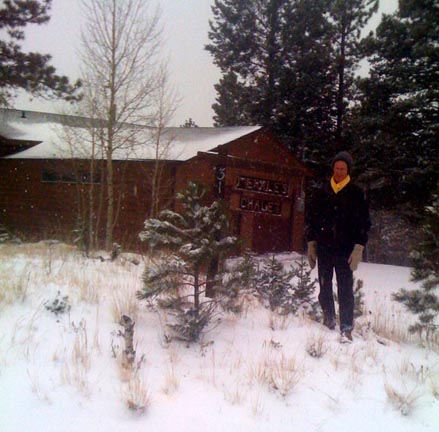 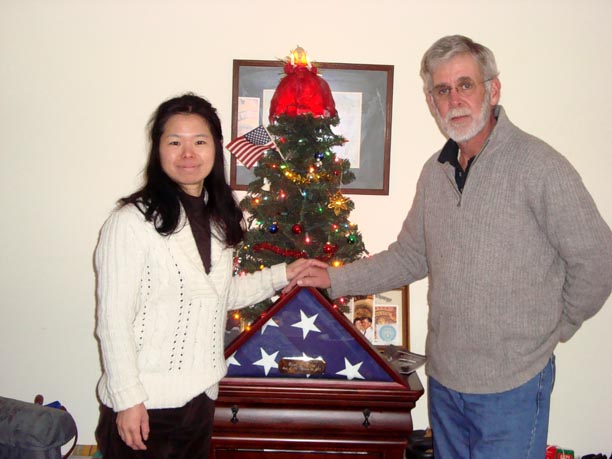 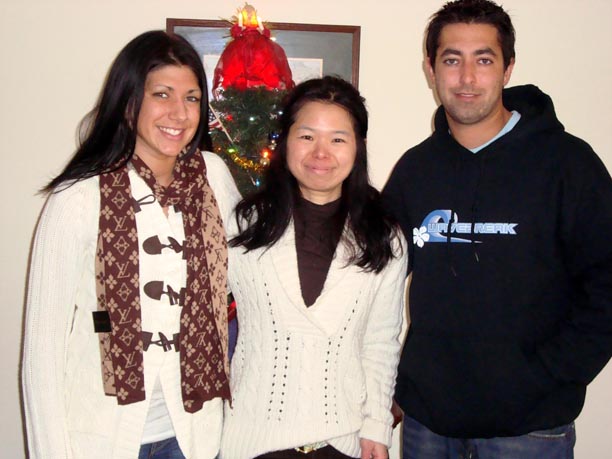 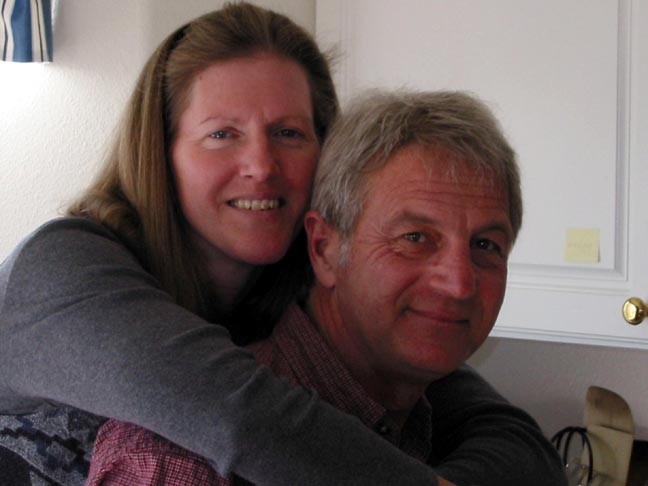 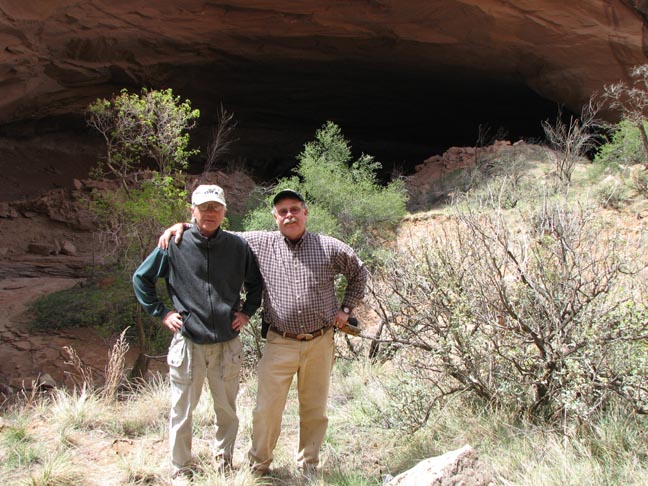 A proud Grandpa should have a bigger smile than this. 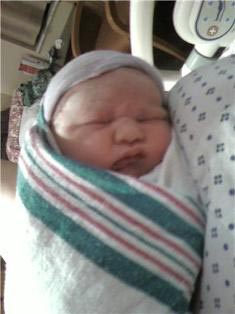 Stan writes: "Well it happened, my grandson was born today.  His name is Nicholas James Davis. He checked in at exactly 9 lbs.  He came aboard at 7:59 pm 3/22/2010.  Caty and baby are doing great.  Now they call me Poppy and I am honored to carry on the name."

A TRUE FISH TALE ... and here's the proof 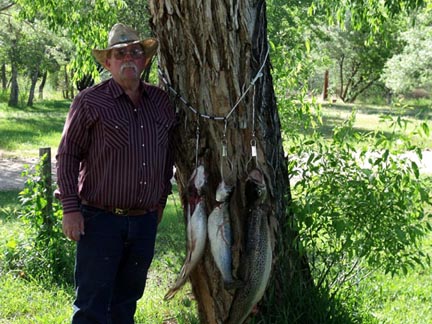 Tom Patterson finds that the trout are bigger in Wyoming.
Here's one keeper and a couple bait fish. 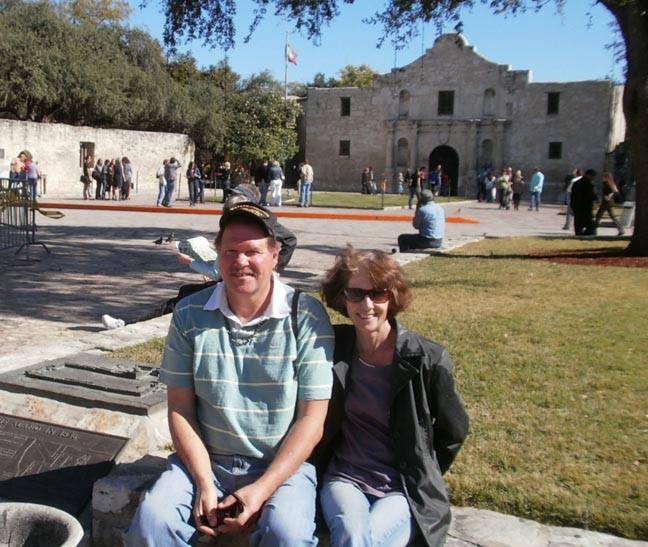