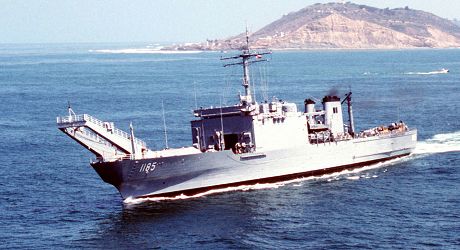 Most folks who served aboard the "Skinny-T" may wonder where the ship's web site came from and why it was erected in the first place. As a shore-duty sailor from the 1950's who regretted never having served at sea, I'd like to take a moment to explain why I first erected the USS Schenectady web site.

Shortly after the demise of the Schenectady, I encountered a YouTube video of a ship that was surplused by the navy and used as a target. What amazed me were the details of a military exercise that utilized aircraft from Hawaii, Japan, Guam, and half a dozen air bases in the US. They consisted of B-52s, B-1s, F-15s, F-18s and many other support and radar aircraft.

The exercise focused on a single, solitary decommissioned navy ship as the target of destruction.  What began as an expression of amazement to the lengths that the military would go to sink a single ship became an object of admiration to me. The amazing thing was that after taking a tremendous battering, this small ship (by navy standards) withstood the missiles and bombs and stayed afloat for three hours.

In this "Last Great Act of Defiance," the Schenectady shook off the wounds of fatal destruction before reluctantly plunging to her grave, off the island of Hawaii.

I was so impressed by this valiant ship that I wanted to share my admiration of her with anyone who might come across my simple web site. Shortly thereafter, several former shipmates wrote me, thanking me for publicizing their ship and volunteering ship and crew photos. One of these former ship mates was Tom Totoris, EMCM (Ret.). He wanted to play a bigger part in the web page and asked if we could construct additional pages. I agreed and told him I would be happy to make him the Webmaster. I was surprised when he arrived at my door two weeks later to learn more about working on web pages. All the way from Albuquerque, NM to Conover, NC!  Since 2006, Tom and I have worked together to make this web page what it is today. I have become acquainted with other crew members, many of whom have become close friends and contributors of this site. Some are no longer with us and we all miss them as we would family members. The rest is history.

Once you swear your allegiance to the United States of America, your decision to join the U.S. Navy becomes more than just an agreement between you and the military. There is something between you and your commitment that eventually becomes a life-time bond. Nobody outside of the navy can understand that life time commitment. Whether you were on a "kiddie cruise" or a four year tour, or whether you made a career of the navy, nobody else can share that experience with you. It remains a source of pride throughout your entire life. Personally, I wish I had it to do all over again. If I had that option, I would have done better, served longer and would have been a better person for it.

And now, after fifty-nine years, having had the opportunity to devote a very small part of my life to the service of my country, as a member of the U.S. Navy, I continue to celebrate the times gone by, the achievements we witness today and the impact the navy will have on the days to come--I am a proud sailor!

Those who served on the USS Schenectady (LST-1185) have a great deal to be proud of. Personally, the "skinny-T" is the greatest ship I NEVER served on. My involvement was only because I recognized a ship that served with distinguished service.

Many folks have a mental picture of an LST as an ugly, ungainly relic of World War II, designed to haul tanks and troops to the beaches. Over a thousand were built to ensure victory with beach landings on D-Day and on the killing beaches in the Pacific. Thankfully, Schenectady never saw those bloody scenes. She was a design lesson learned from the beaches of combat. She came in time for Vietnam yet never suffered casualties from that horrific war. She was designed by naval architects who incorporated the best and most innovative designs possible.

Her role in amphibious operations has now become obsolete and her presence is no longer required. Other classes of ships have filled the vacuum she formerly filled. That obsolescence required that she be retired from service. The Navy Department made the final decision on her ultimate fate. Rather than face the scrapper's torch, she was given the opportunity to meet her fate in the "Last Great Act of Defiance." During Operation Resultant Fury, as a towed target, she faced off against the best the military had to offer. She became a target of military forces from three continents. She weathered an attack from state-of-the-art weapons systems and refused to roll over. For over an hour, the Skinny-T proved the integrity of her design and refused to surrender to the overwhelming onslaught. Only after JDAMs, MSTEs, GBU-10s and conventional ordinance took their toll and breached her hull did the Schenectady finally succumb to the attack and slip beneath the waves.

Every crew member, past and present, should celebrate the time they spent on this magnificent ship. Each and every sailor is a part of a much greater picture and plan. We are all called on to perform our duty as we are called on to do so. When we have the chance to serve on a ship with so many opportunities to enhance and support the role of the U.S. Navy, it is especially gratifying.

The USS Schenectady may not have appeared to have been an attractive ship to some folks. Such was not the case. She was of a design far ahead of her time and served, and excelled, the purpose for which she was designed. Her service was exemplary and those who stood watch, replenished and supplied, transported and accompanied the fleet will be forever be rewarded for their faithfulness.

And that's who you are!!! Your dedication and service should be forever remembered. That's why the USS Schenectady (LST-1185) web site was erected. Each and every one you who served on board this great ship have a legacy worthy of passing to your children and grandchildren. The Skinny-T was not just another navy ship. She was an example of the very best in naval service, architecture and the pride that only a sailor can understand.

As one who never served on board this great ship, I can only offer my humble thanks for your service. PLEASE, never allow the memory of your service to diminish. The memories you have, the service you gave, the honor of this ship you provided, should never be forgotten.

The USS Schenectady should serve as a permanent reminder for, not only a great ship but for the service and devotion you showed during your time aboard. Other services; Army, Marines, Air Force,.Coast Guard and Merchant Marine have their recollections--but the U.S. Navy is unique. Our service revolved around those we spent close times with and the times we shared. They bunked above or below us, we showered and shaved with them. We shared the intimate details of our lives with them. Long after we separated from the service, we have that indelible and forever memorable connection: OUR SHIP

As a shipmate who served apart from y'all, I hope that you men maintain the bond that first brought you together. Whether it was as a plank owner or as a decommissioning crew member, you all have a precious bond that can never be broken. It is my fervent wish that you are able to maintain this bond through continual ship's reunions.