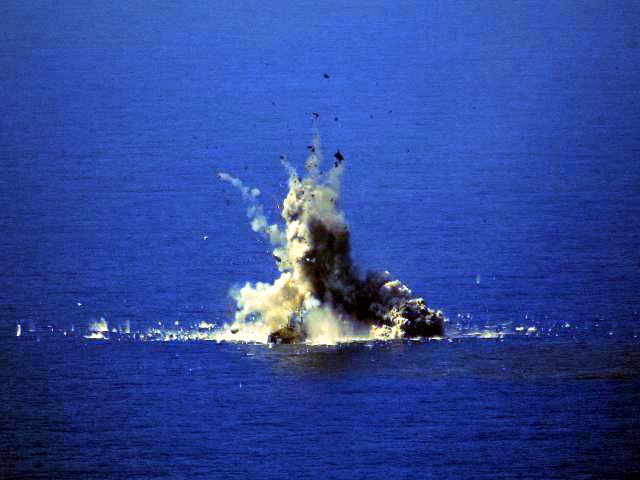 The USS Schenectady reached the end of her career only when her bow made contact with coral sand, 2,644 fathoms beneath the Pacific, west of Kawai, Hawaii.

The USAF threw everything they had in their munitions catalog at her.
JDAMs and LGBs stuck her vitals--and she continued to cling to life.

The wounds she suffered allowed torrents of seawater to flood her.

SCHUMER: ARTIFACTS FROM THE U.S.S. SCHENECTADY HAVE BEEN SECURED

Schumer [NY Senator, Charles Schumer] announces that artifacts from the U.S.S. Schenectady have been secured by the Navy prior to the ‘smart bomb’ demonstration which is scheduled to sink the decommissioned ship today

Schumer says pending Navy review, the U.S.S. Schenectady artifacts will be on loan to the Schenectady County Historical Society

US Senator Charles E. Schumer today announced that after working with the Navy, several artifacts have been secured from the U.S.S. Schenectady. The ship, which was decommissioned in 1993 after 23 years of service, is scheduled to be sunk today as part of a ‘smart bomb’ demonstration. Schumer called on the Navy to preserve these artifacts as a legacy of the ship, when he heard that it was due to be sunk. The Navy, upon review of a display and maintenance plan, is willing to loan these artifacts to the Schenectady County Historical Society.

"It is one of the highest honors for a community to have a Naval ship named after their city," said Schumer. "The U.S.S. Schenectady served this country with distinction. And though this means its demise, I am glad these artifacts have been saved so that the community can always take pride in the ship’s service." [See site]

Parts of this 522-foot ship were built by two Schenectady based companies, General Electric and the American Locomotive Company. In 1968, Navy Secretary Paul R. Ignatius received a letter from Kimberly Duto, a fourth grade student from Franklin School, asking that a ship be named for her hometown, Schenectady. The U.S.S. Schenectady earned four battle stars during Vietnam, and since 1993 has been located at the Naval Inactive Ship Maintenance Facility in Pearl Harbor. The sinking of the ship today will be part of the fight against terrorism. The Air Force will test a new technology where guided missiles hit a moving target. Assemblyman James N. Tedisco contacted Schumer’s office for assistance in obtaining artifacts from the U.S.S. Schenectady for the Historical Society.
--------------------------------------------------------------
In 1990 the Seabees participated in two SOUTH PAC cruises. Both Naval Mobile Construction Battalion 7 and Underwater Construction Team 2 embarked civic action detachments on the USS SCHENECTADY and USS FLORIKAN. Port calls were made in the Marshall, Gilbert, Solomon, and Cook islands, and at Papua, New Guinea; Tuvalu, and Tonga. Naval Mobile Construction Battalion 1 participated in the West African Training Cruise (WATC). The battalion embarked civic action detachments on the USS BARNSTABLE COUNTY which made port calls at Cape Verde, Senegal, Gambia, and Guinea-Bissau. High praise was received from all recipients.

Additional acknowledgements can be found at SCHENECTADY

"From police corruption to multimillion-dollar budget deficits, the city has suffered its share of setbacks in recent years, but nothing like the Navy ship named in its honor is about to undergo.

"The USS Schenectady, a 34-year-old decommissioned Newport class tank landing ship, will be sunk off the coast of Hawaii next week as part of an Air Force demonstration of new "smart bombs" that can destroy moving targets, Capt. David Faggard, Pacific Air Forces spokesman at Hickam Air Force Base, said Monday as reported in the Albany, NY, Times Union.

"The ship, mothballed at Pearl Harbor, will be towed into a practice range at sea where B-52 bombers and other Air Force flights will participate in the demonstration, dubbed "Resultant Fury," Faggard said. Once sunk, the ship will become a reef for fish and other marine life, he said.The sinking, scheduled to take place on Nov. 22 or Nov. 23, will bring to an end the history of a ship that was named at the suggestion of a Schenectady schoolgirl who wrote a letter to the secretary of the Navy. A number of pieces of the ship were built by Schenectady-based General Electric and the American Locomotive Co., said Kathryn Weller, curator of collections at the Schenectady Historical Society, which coincidentally is running an exhibit on the ship until the end of the month.

"Would it be possible to name one of the ships -- Schenectady," Franklin School fourth-grader Kimberly Duto wrote in a May 13, 1968, letter to then-Navy Secretary Paul R. Ignatius.

"The 522-foot ship was decommissioned in 1993, 23 years after it was commissioned and after earning four battle stars for service in Vietnam. Since being decommissioned, the ship has been docked at the Naval Inactive Ship Maintenance Facility in Pearl Harbor.

"In 1993, the then-mayor waged an unsuccessful effort to bring the ship to Schenectady, where he hoped to use it as a museum or floating casino docked on the Mohawk River. But the proposal found little support from the Navy. Duci was saddened to learn that the bottom of the Pacific Ocean was slated to be the ship's permanent resting place.

"The city has taken a battering of another kind in recent years. Four Schenectady police officers were sent to prison in the early 2000s after being convicted of corruption. The latest trouble is city finances. Schenectady has accumulated a $10 million budget deficit in recent years and Wall Street has given the city the lowest municipal bond rating in the state.

"But City Council President Frank Maurizio said the USS Schenectady's plight is not a metaphor for the city. "We have suffered some hits," Maurizio agreed, adding, "But I think we're coming back. It's a shame that our namesake is going to be demolished, but not so for the city."

"Mayor Brian U. Stratton said he was gratified that the ship named in honor of Schenectady would be useful right to the end. Military missions are "not always glamorous and sexy," he said.Faggard said next week's mission will allow the Air Force to demonstrate new technology for guided weapons. The U.S. military already uses satellite-guided "smart bombs" to hit stationary targets, but the mission also will allow the Air Force to test out the weapons on moving targets.The new missiles, he said, could be used on ships operated by enemy nations or terrorists." [Albany, NY Times Union]

Below are some of the DOD films taken by some of the USN
and USAF assets used to attack and destroy the USS Schenectady.