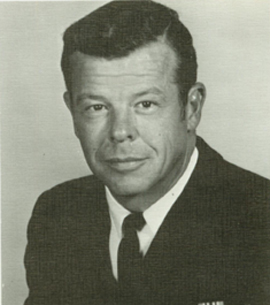 Other than commanding Navy ships, the job may have been the most responsible one Capt. David Sigsworth ever had, but his family knew little about what he actually did.

“He never talked about it,” recalled his son, Grant Sigsworth. “I would ask him. He wouldn't tell me.”

That top-secret job was assistant director of Naval Intelligence in the Pentagon. Mr. Sigsworth held the post from 1975 to 1977.

Retiring from the Navy in 1982 and in his mid-50s, Capt. Sigsworth eschewed a second career, instead tending to his flower garden at his Coronado home and qualifying as a master gardener. He joined the Coronado Floral Association with his wife and became its president from 1995 through 1997 while also helping prune and tend the rose garden in Balboa Park.

Mr. Sigsworth died Jan. 15 in Sharp Coronado Hospital after a sudden bout of pneumonia. He was 79.

His plunge into gardening after a career at sea and in intelligence gathering reflected “an affinity for making things grow” from his childhood on an Ohio farm, his son said.

Suzie Heap of Coronado, a member of the Coronado Floral Association for four decades, remembered him as pleasant, bright and quiet. His wife, a fellow Naval officer, Janet Burdick Sigsworth, enjoyed floral arrangement, and Mr. Sigsworth was particularly fond of raising roses and bonsai trees, she said.

“When he finished, if someone had The Wall Street Journal's, he would offer to help them with it,” Heap said.

Sondi Arndt, a past president of the association, said she thinks the couple joined the floral association as a way to be involved in the community, as did many military retirees.

The couple helped organize the annual April floral competition; she helped with the newsletter, and he helped judge a competition of church lawns. Mrs. Sigsworth died in 2002.

A precocious child, he once named a cow “Anonymous” when no better name came to mind, his son said.

Turning 18 and perhaps seeing a way off the farm, he enlisted in the Navy. He was finishing boot camp when World War II ended, and he was released from service, his son said.

He graduated from Oberlin College in 1950. He started graduate studies in European diplomatic history at Ohio State University, then changed his mind and graduated in 1951 from Navy Officer Candidate School in Newport, R.I.

In New Orleans, while he was stationed aboard the Haas, he met his future wife, whom he married in 1954.

He had several shore staff roles, then was executive officer of the oiler ship Hassayampa. Probably his most rewarding tour was as the first commanding officer of the landing ship Schenectady, his son said.

“It was an honor to be selected the first,” Grant Sigsworth said.

He became assistant director of Naval Intelligence in 1975 at the invitation of the director, Adm. Bobby Ray Inman.

Grant Sigsworth, himself a retired Naval reserve officer, said he has concluded, through research through public records, that much of his father's intelligence work was involved with monitoring locations of Soviet submarines.

He returned to sea in 1977 as commanding officer of the amphibious transport dock Dubuque.

“I have a feeling he enjoyed the ships more” than the Pentagon, the son said.

His final tour, before retirement July 1, 1982, was as chief of staff of the 11th Naval District.

“He was just one of many, many career sailors that toiled in anonymity for no other reason than duty,” his son said. “Sounds corny, but I think it's true.”

In retirement, Mr. Sigsworth remained a voracious reader, with a particular interest in history of World War II politics and the Napoleonic Wars. He took classes through UCSD's extension program to earn the master gardener designation.

He survived several bouts with cancer, but was active, attending association meetings, until he was hospitalized with pneumonia.

Survivors include: his son; a daughter, Leslie Higginbotham, of San Diego; and one grandchild.

He was buried Jan. 26 in Fort Rosecrans National Cemetery.

Floral association members went to his home last week and dug up his garden of more than a dozen Heritage English rose plants. They will distribute them to master gardeners for caring.