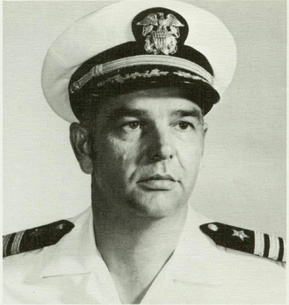 Captain Raymond J. Czar passed away quietly at home on the 20th of September, 2007 in Scottsdale, Arizona.

Captain Czar's son, Richard Czar, has arranged for interment in Fort Rosecrans National Veterans Cemetary , Point Loma California, on November 9th at 10:00. He states: "I would encourage those that knew my father or served with him to attend this service for those that may still reside in the Southern California area. I also expect that there will be old shipmates from the USS Fox, my father, as you know from his bio on this site, Pop served as XO from 1970 - 1971 December before he took command of the Schenectady .If you wish to contact me by telephone the following number is my Cell phone (602) 793-7142. You may call me anytime I am currently at my familes home here in Arizona. My mother and I would be happy to see old shipmates bid the Skipper a fond farewell tenatively/ hopefully November 9th Veterans Weekend.